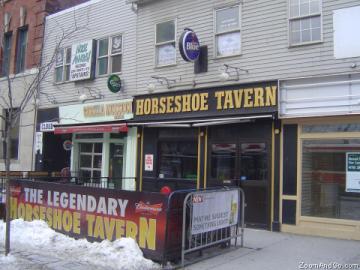 The Horseshoe Tavern is a bar and concert venue located on Queen Street at Spadina (370 Queen St. West) in Toronto. One of the city's most well known venues it hosts everything from local talent (usually 3+ bands) to mid-level touring Canadian, American and International acts.

Typically, local shows at the Horseshoe are self promoted by the bands performing, but the venue does take ads in some of the local free newspapers and does some advertising on their website and social media. The Horseshoe provides a sounds person and 1-2 door people (depending on the night of the week and how busy you expect it to be) which comes out of the door sales for the evening (see right column for price breakdown).

You can expect some foot traffic due to the venue's location and reputation, but as there are several well known venues in the immediate vicinity, aggressive promotion is still necessary. Collective Concerts, the talent buyer for the venue puts an emphasis on a strong lineup and heavy promotion. They also prefer acts not to have any shows in the Toronto area within a few weeks of playing the Horseshoe.

While the venue hosts several "Showcase" and "New Music" nights that are unpaid during the week, a well planned weekend (or possibly Thursday) show can potentially bring in a good number of people and be rather profitable.

# stevefrise 2018-12-05 20:06
A larger venue located in a pretty well trafficked and popular area of Toronto. You'll frequently see metal, rock and indie bands here, although they do host almost any style of music.
Refresh comments list